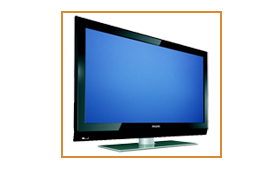 Television (often abbreviated to TV or idiot box in British English is a widely used telecommunication system for broadcasting and receiving moving pictures and sound over a distance. The term may also be used to refer specifically to a television set, programming or television transmission. The word is derived from mixed Latin and Greek roots, meaning "far sight": Greek tele (t??e), far, and Latin vision, sight (from video, vis- to see).

Since it first became commercially available from the late 1930s, the television set has become a common household communications device in homes and institutions, particularly in the first world, as a source of entertainment and news.Since the 1970s, video recordings on VCR tapes and later, digital playback systems such as DVDs, have enabled the television to be used to view recorded movies and other programs.

An image source. This is an electrical signal representing the visual image, and may be from a camera in the case of live images, a video tape recorder for playback of recorded images, or a film chain-telecine-flying spot scanner for transmission of motion pictures (films).
A sound source. This is an electrical signal from a microphone or from the audio output of a video tape recorder or motion picture film scanner.
A transmitter, which generates radio signals (radio waves) and encodes them with picture and sound information.
An antenna coupled to the output of the transmitter for broadcasting the encoded signals.
An antenna to receive the broadcast signals.
A receiver (also called a tuner), which decodes the picture and sound information from the broadcast signals, and whose input is coupled to the antenna.
A display device, which turns the electrical signals into visual images.
An audio amplifier and loudspeaker, which turns electrical signals into sound waves (speech, music, and other sounds) to accompany the images.
Practical television systems include equipment for selecting different image sources, mixing images from several sources at once, insertion of pre-recorded video signals, synchronizing signals from many sources, and direct image generation by computer for such purposes as station identification. The facility for housing such equipment, as well as providing space for stages, sets, offices, etc., is called a television studio, and may be located many miles from the transmitter. Communication from the studio to the transmitter is accomplished via a dedicated cable or radio system.

Television signals were originally transmitted exclusively via land-based transmitters. The quality of reception varied greatly, dependent in large part on the location and type of receiving antenna. This led to the proliferation of large rooftop antennas to improve reception in the 1960s, replacing set-top dipole or "rabbit ears" antennas, which however remained popular. Antenna rotors, set-top controlled servo motors to which the mast of the antenna is mounted, to enable rotating the antenna such that it points to the desired transmitter, would also become popular.

In most cities today, cable television providers deliver signals over coaxial or fiber-optic cables for a fee. Signals can also be delivered by radio from satellites in geosynchronous orbit and received by parabolic dish antennas, which are comparatively large for analog signals, but much smaller for digital. Like cable providers, satellite television providers also require a fee, often less than cable systems. The affordability and convenience of digital satellite reception has led to the proliferation of small dish antennas outside many houses and apartments.

Digital systems may be inserted anywhere in the chain to provide better image transmission quality, reduction in transmission bandwidth, special effects, or security of transmission from reception by non-subscribers. A home today might have the choice of receiving analog or HDTV over the air, analog or digital cable with HDTV from a cable television company over coaxial cable, or even from the phone company over fiber optic lines. On the road, television can be received by pocket sized televisions, recorded on tape or digital media players, or played back on wireless phones (cell or "mobile" phones) over a high-speed or "broadband" internet connection.